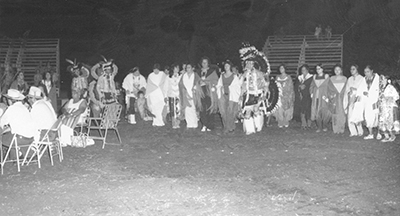 The Tonkawa, like most the Plains tribes, had a variety of dances that were performed regularly and ceremoniously. Among many dances belonging to the Tonkawa were the: Buffalo Dance, Deer Dance, Wild Hog Dance, Turkey Dance, Dance of the Short Steps, Notched Stick Dance, and a dance called “Singing All Around” which later became known as the “Back and Forth” dance.

Dances connected with war were especially important to the Tonkawa. The “Scout” dance, the “Scalp” Dance, and the “Hold-Shield” dance were three primary dances associated with warfare.

The “Wolf” dance was a particularly solemn ceremony performed to commemorate the “origin” of “creation” of the Tonkawa. This dance was probably the most sacred of all dances and efforts were made to keep it secret from outsiders. 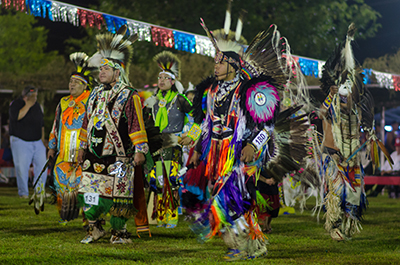 Another spiritually significant dance was the “Tome-ka” or “Water-Drum” dance which really was not a dance at all, but a religious ceremony which later became known as the “Peyote Ritual.” This form of religious expression or worship had been a cultural tradition among the Tonkawa and Lipan since before the coming of Columbus. Other French and Spanish explorers noted this religious ceremony which utilized the peyote as a “sacrificial medicine” in use by the Tonkawa and Lipan during the 1600’s. During the last 100 years, however, many tribes have adapted the use of this “sacrificial medicine” to their own religious ceremonials through a process of cultural exchange. The name “Native American Church” has been applied to this newly developed inter-tribal religion, but to the Tonkawa and Lipan, this religion is as old as the people themselves. 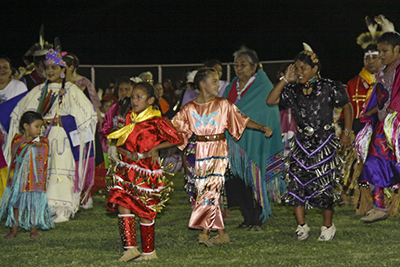 The first two years of the Tonkawa Pow-Wow, no Princesses were selected. These were the transitional years; many of the tribal members were not well acquainted with the customs and the rituals of what transpires during such events. Through the guidance of those that have lived this as their life, the understanding of what it means, and what it takes to be responsible with such honors assisted with the first selection in 1977.

The role and responsibilities of becoming and remaining a Princess is a great honor which one holds as the ambassador/representative of the tribe. Regardless of age, many tribes select those who have shown qualities in personality, dependability, leadership, independence, and cultural knowledge. These are only a few qualities expected of a Princess. Today, the expectation continues with the academic model, athletic abilities, and cultural linguistic ability. Considering the fact that many Indian people are inter tribally married, many young girls, ladies, and women, to this day, are unable to speak their own language but are more fluent in the English language required by many educational institutions. For those that did not have the privilege of their grandparents, and Great grandparents even aunts and uncles, our langu- ages have diminished but through efforts now are being reborn.

The Tonkawa Tribe has been blessed by being represented by many outstanding young ladies. Many of the younger girls watch, listen, learn, and patiently await their turn.

Our Princesses have represented us not only at Indian gatherings and events, but as leaders through academics and in athletics, “You” have shown us what it is to be proud of your heritage; and you have accomplished more than you’ll know.