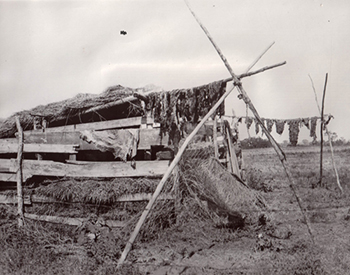 The most important animal sought by the Tonkawa was unquestionably the bison. The bison provided them with much of their food, and the skins were used in making clothing and tipis. Bison fat, meat and hides were also traded. The bones were also utilized in manufactured items.

The deer – used both for its meat and skins ranked next to the bison.

The Tonkawa had herds of horses; some of these were obtained through raids and used for transportation purposes and also used in battle. Wild horses were hunted for addition to the herds, and sometimes these were sought for the hair from their manes and tails, the rest of the animal being abandoned.

The wolf was reportedly not hunted, for the Tonkawa believed that they had been brought into the world by this animal, or were even descended from it. (Nevertheless the Tonkawa were in possession of a number of wolf skins, which were used in performing the wolf dance.) The Tonkawa claimed that if they killed a wolf they would lose their eyesight temporarily, go crazy, or contract a fever, unless special ‘medicines’ were taken.

When the Tonkawa encountered a wolf they asked him to provide them with deer when they hunted. After the hunt when the men returned to camp , they hung the game in some trees, first conducting special rites to protect from being carried off by the wolves. The Tonkawa stated that on one occasion a member of the tribe killed a deer but neglected to perform the necessary ceremony before hanging up the meat he had obtained. When he returned, the meat was gone, whereas that belonging to the other Indians had been left intact.

Apparently the taboo on killing wolves was in some instances extended to include the coyote. The grey wolf was said to be ‘the owner of the earth’ and his permission was asked when hunters entered new hunting grounds.

Collecting ranked next to hunting in the Tonkawa economy, and in the first half on the nineteenth century it became increasingly important as a means of securing food. They gathered a number of herbs, edible roots, acorns and wild fruits. Pecans were collected in large numbers. At times, fish and oysters were also obtained and used as food.

The Tonkawa were a nomadic group which relied little upon agriculture. According to Tonkawa tradition, an injunction had been received from the wolves, which supposedly brought the Tonkawa into the world, not to plant crops or build permanent dwellings, but to lead the predatory existence of these animals. The Tonkawa tried to follow this counsel.

Most meat was cooked by roasting; however, some of it was cured by the women. Dried venison or bison meat was pounded and mixed with pecan meal to form pemmican, the principal food of the Tonkawa when they were traveling or on the warpath.

Before the tuna (prickly pear) could be eaten, the spines had to be removed. For this purpose the Tonkawa used pincers made from slivers of deer antler. Food was occasionally seasoned with chili made from the berries of the red pepper plant. And oysters were said to be ‘barbecued’ in their shells.