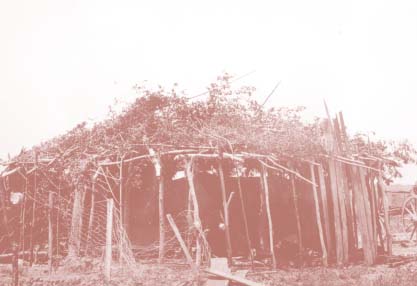 In as much as the Tonkawa led a nomadic existence, they built rather simple, make-shift shelters almost always of a temporary nature. They had tipis which were generally small and constructed of poles covered with bison hides. The Tonkawa evidently used these more extensively in the eighteenth than in the nineteenth century, for the tipis diminished along with the bison.

Brush shelters were also used. These were small, temporary dwellings, which were abandoned whenever the Indian moved camp. First a framework of poles and light branches was set up to form a cone. Over this were laid smaller branches, bark, “brushwood,” or mesquite. Occasionally this structure was thatched with grass or covered over with a few bison hides. The only mention of internal arrangement was that a fire was laid in the center. These lodges were five (5) to seven (7) feet high, flat on top, and open on one or two sides. 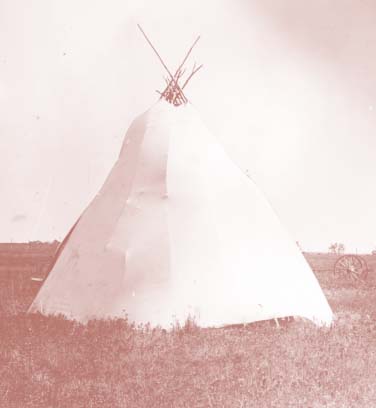 An important weapon was the bow and arrow, which was used in warfare and in hunting bison and deer. The bow string was generally fashioned from bison sinew. The arrows were supposedly “poisoned” with the juice of the mistletoe leaf (this is know to be non-poisonous).

Other weapons were the spear and the lances, used in warfare and in bison hunting. Here too, “poison” from the mistletoe leaf was used. As defensive armor the Tonkawa wore “jackets,” helmets, and shields of dressed hides.

Some additional items of Tonkawa material culture are harnesses and lassos made of bison hides. These include rope made from the tails and manes of horses, as well as rope and coarse cloth manufactured from the inner back of the mulberry tree. He also notes that they wove baskets and grass mats. They also made pots of fired clay.

The Tonkawa also possessed pipes. Musical instruments were rattles made of gourds containing pebbles or buckshot, and drums consisting of a metal container with a deerskin head or simply a deer hide tightly stretched over a hoop.