The dances connected with war were particularly important among the Tonkawa. The men who were to undertake a raid held a “scout dance”. The dance began after dark. A number of warriors stood in a ring holding a large un-tanned cowhide which they struck in unison with sticks or switches about two feet long. A leader keep time, and the whole ceremony was conducted with great order and formality. During part of the ceremony the men would get up and sit down repeatedly for about ten minutes, after which they smoked cigarettes. The men sang during the proceedings in low pitched, then high pitched voices. They imitated animal cries to represent the “hunting” of wild Indians. The men sang twice before the tipi of each warrior who was to participate in the raid, then moved on to the tipi of the next man. 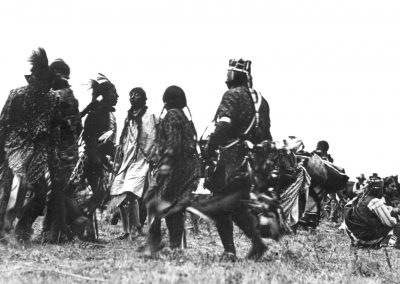 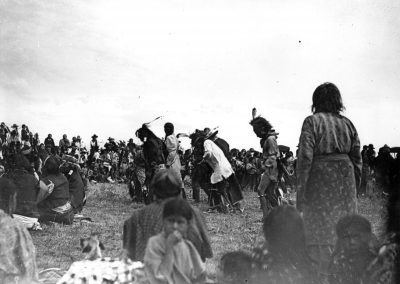 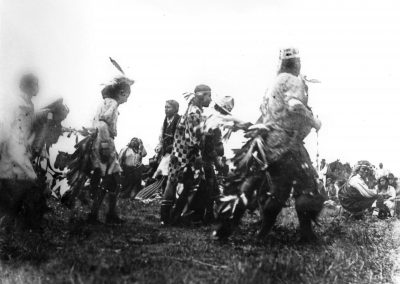 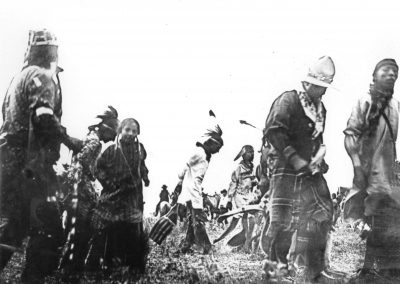 Several descriptions to the “scalp dance” have been given. In one of these the warriors, dressed in their best breech-cloths and decorated with “war” paint, formed a circle around the scalp; this had been covered with paint and was held up on the point of a lance by a woman. Each of the men was supposed to have some kind of musical instrument. All of these were played in unison, along with a drum consisting of a deer hide which had been tightly stretched over a hoop. The Indians also “chanted,” at the same time raising and lowering their bodies in time to the music; this suggests similarities to the scout dance.

Elements of other scalp dances have been presented. The Tonkawa scalped a Comanche Indian, cut off his hands, and placed the body on a bonfire of logs. The scalp and hands were tied to a pole which was held aloft during the ceremony. Sometimes two scalps were used; these, however, had first been cut into eight parts. Another “scalp” dance which was celebrated every night for one or more months, but it could be held intermittently during a period of about a month. However, this dance is radically different from those described above, for no mention of a scalp being used. Furthermore, the women danced while the men watched. Water may have been used in this ceremony, for the singers repeated the words: “Come up, woman, carry water for dancing.”

A few other war dances have been described. One of these was the “hold-shield” dance, referring to a bison-hide shield which was used in the rite. Only the men participated. They moved in a circle around the fire, giving war whoops to music provided by skin drums. In still another dance the men apparently rode horses in a circle. Specially improvised songs were sung at the war dances. And the achievements and important events in the history of the tribe were occasionally recounted. The dancers in war ceremonies wore special headdresses of feathers and of cloth decorated with buttons and embroidery. 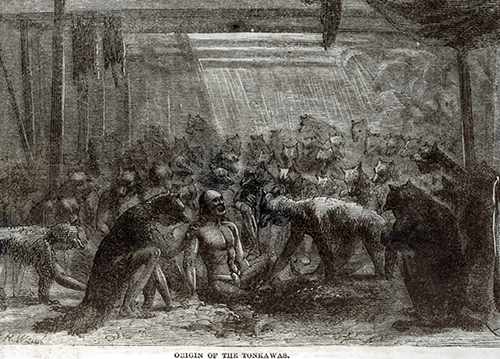 An especially important ceremony among the Tonkawa was the “wolf dance” This was supposed to commemorate the “origin” or “creation” of the Tonkawa. The wolf dance was held in a large dance lodge. It was essentially a solemn ceremony and efforts were made to keep it secret from outsiders. Only the men participated. One of these wolf dances was witnessed by the Superintendent of Indian Affairs for Texas, who had lived with the Tonkawa for a time. According to this account, there were fifty warriors covered from head to toe in wolf skins. These were carefully draped so that the dancers would resemble wolves as much as possible. The Tonkawa entered the lodge in single file, then moved about on all fours growling and howling like wolves. From time to time, they put their noses toward the ground and “sniffed” in various directions. Suddenly one individual stopped and uttered a sharp cry and and began scratching the ground at a certain predesignated spot. The other gathered around and also began digging with their hands. In a few minutes they uncovered a Tonkawa Indian who had been buried there before the ceremony. The wolf dancers ran about sniffing and examining him with intense interest. Next, some of the dancers, representing the older, more important wolves, met in a council to determine what should be done with this Tonkawa Indian, They finally advised him to live as the wolves did – by killing and stealing. They placed a bow and arrow in his hands, saying that he was to use this to provide himself with food and clothing. He was to wander about like the wolves and never build a permanent dwelling nor cultivate the soil – if he did he would surely die.

Another important ceremonial was the “buffalo dance”. In this, some of the men wore bison horns and caps or hats and danced to the beating of a drum. Apparently some of the dancers used a gun to “shoot at” others who were supposed to represent the bison, and these latter “caught” bullets in their hands to feign being wounded. Still other Indians simulated the driving of lances through the bison dancers. This ceremony lasted all night.

The Tonkawa Indians also had a “deer dance” in which both men and women participated. Nothing is know concerning it except that the dancers ate the red bean of the wild mesquite plant during the ceremony. In still another rite some of the women danced, each one holding a long stick to which were affixed deer “claws”. These sticks were to be struck on the ground.

Both men and women participated in the “wild hog dance” . The main feature of the rite was the eating of the bulb of a plant which grew in Mexico. Although it was not identified, it may well have been the peyote bulb. The music was supplied by a drum which had been covered with a “wetted” hide so that only muffled sounds would be produced.

In the “turkey ceremony” the women danced in a ring, imitating turkeys going around in a circle. A few of the women participated in the “notched stick dance”. Apparently some of them rubbed a notched piece of wood to produce a noise which served to call the other women to the dance.

In a dance called “singing all around”, rattles were used. During the proceedings a women would pick out a man she liked and sing with him. In somewhat similar ceremony, the women danced in a ring around four or five men and sang special songs.

The “dance of the short steps” was also for the women, the men here being the spectators. In several other ceremonies, the women lined up in rows behind the men. Then the entire group moved in unison either forward and backward or from side to side. Sometimes they also sang to music provided by drumbeats and the rattling of gourds.

The Tonkawa were among the first of the tribes north of Mexico to utilize the peyote bulb in the “peyote rite”. Only those Indians who had left their hair long, who were wearing “perfume” made of special herbs, who had painted faces, and who were attired in a breech-cloth and buckskin leggings and shirt were permitted inside the ceremonial tipi. The entrance of the tipi faced the east. After an individual was inside he was supposed to turn to his left and move around the tipi in a clockwise direction. Most of those who were participating in to ceremony sat in a circle around the peyotes, which were laid out on a piece of buckskin inside a flat basket. The peyotes were passed around the circle always in a clockwise direction. At intervals the Indians prayed and saw visions. Those persons who were to sing sat in a row. Each singer sang four songs and at the same time beat on a drum fashioned from a large metal container, the top of which had been tightly covered with buckskin. When one of the singers had finished, he passed on the to his neighbor and shook a gourd rattle for this person. And after his neighbor was finished singing, the rattle was given to him. The ceremony lasted for four days and four nights.

The Tonkawa also held a “sun dance”. The Tonkawa sun dance differed from the typical sun dance of the Plains primarily in that the Tonkawa did not look into the sun or practice any form of “torture.” Besides this, we only know that the ceremony was restricted to the men, who beat on a cowhide with a stick.

A “ghost dance” was witnessed after the Tonkawa had been permanently settled at the Oakland Agency and had been in contact with a number of Plains tribes in Oklahoma. During this rite, some of the men sang while others beat on drums. They went into “trances” and recited “visions” of the departure of the White men in ships and the re-appearance of the bison on the Plains.